The Bloomberg Terminal is Windows-based proprietary software that offers users real-time access to global news sources, financial data, and analytics tools. Historically, only for-profit financial organizations have used the Bloomberg Terminal. However, Bloomberg has vast resources that would be useful to the advocacy community.

Companies are increasingly making pledges to improve the sustainability of their production methods. The reputational risk to big companies associated with sourcing goods from downstream producers can influence the price they are willing to pay for a commodity. This, in turn, can help change the way producers operate. However, sustainability pledges are hard to enforce if there is no mechanism to track assets from the source or producer level to the upstream manufacturer or consumer level.

For advocacy groups, the process of tracking assets has historically been a grassroots effort that relied on individuals manually collecting data, such as where and how a commodity was grown, and disseminating it through proprietary channels to a limited network. The financial industry has also struggled to track assets in most industries. Government and advocacy groups are increasingly setting up initiatives to fill the gap in certain sectors, such as palm oil and seafood, but much work remains to be done.

In the meantime, using the Bloomberg Terminal could improve the efficiency of gathering this information, as well as extend its ultimate reach. It’s a two-way street: Bloomberg allocates resources, such as analysts and technicians, to specific sectors based on the level of demand for information from its users. The advocacy community, through increased activity, could encourage Bloomberg to increase its coverage of companies in a specific sector or industry, thereby increasing the overall amount of information available.

Palm oil nicely illustrates the relationship between advocacy initiatives and financial interests. Global population growth has supported an increased demand for palm oil, which is used in a wide suite of consumer products, resulting in high prices and large profits. As a result, producers have expanded production, clearing tropical rainforests to install plantations primarily in Indonesia and Malaysia and to a lesser extent in Africa and South America. Tropical deforestation is one of the main drivers of global carbon emissions, which exacerbate climate change. Using supply and demand to affect the price of palm oil coupled with quantitative analysis of reputational risk to big companies could help manage tropical deforestation.

The gaps in the current palm oil-tracking process have allowed producers and consumers to trade ordinary palm oil and “certified sustainable palm oil” (CSPO) as designated by the Roundtable on Sustainable Palm Oil at the same price point. This encourages co-mingling of products with minimal risk that the public will ever learn. Determining a price point at which CSPO becomes more profitable to producers than non-certified palm oil could encourage more producers to adopt sustainable processes. Sustainable palm-oil production can improve yield efficiency, which could reduce the need for additional tropical deforestation, thus reducing global carbon emissions.

Palm oil, like most commodities, is sold and traded using futures contracts. A futures contract is an agreement to buy or sell a commodity or other asset today that will be delivered and paid for at a later date. Companies trade palm-oil futures contracts based on the palm oil’s source country and type — such as crude, kernel oil, kernel cake, and so on — and the Bloomberg Terminal tracks palm oil the same way.

Using Malaysia as an example, the screen shot below shows the kind of information the Bloomberg Terminal offers on palm-oil futures contracts. It gives an overview of the Malaysian palm-oil market broken down by palm-oil type and source location at the state level. This screen can be found by typing the code MPOS (short for Malaysian Palm Oil Statistics) in the command line and hitting the GO key on the terminal’s proprietary keyboard. 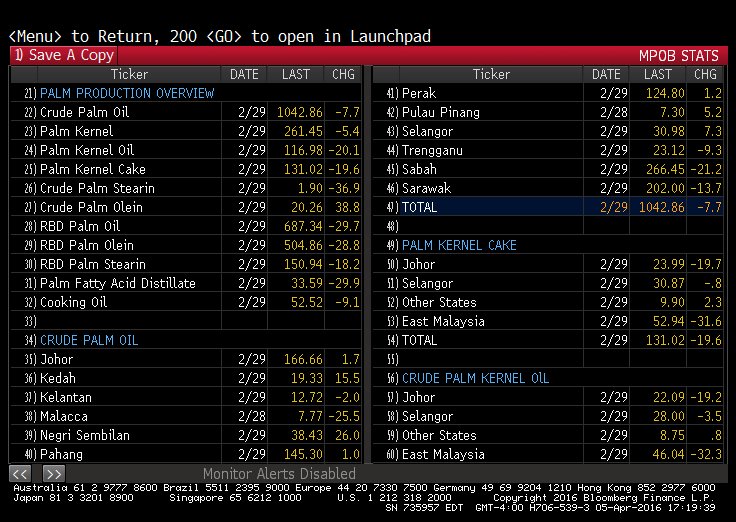 Analyzing the different factors that affect the price of palm oil can be tricky. The availability of distribution substitutions, such as biofuels, and the lack of detailed tracking information makes quantifying the risk to producers of unsustainable palm oil difficult. Combining the grassroots efforts from the advocacy community with the resources of the financial community could address this disconnect.

For example, in its recent analysis of Malaysian palm-oil producer Felda Global Ventures (FGV), Washington, D.C.-based sustainability risk analyst Chain Reaction Research used the Bloomberg Terminal’s research tools to analyze key financial data. Its resulting report showed that FGV was less profitable and had higher debt than its peers. FGV is currently at risk of losing its RSPO membership, which would prevent over 300 corporations with zero-deforestation policies from purchasing FGV’s palm oil. The Chain Reaction report estimated a loss of $6 million to $12 million in revenue in 2016 as a result. In other words, FGV has an incentive to maintain its RSPO membership in good standing that is worth at least several million dollars — and the company’s survival may even depend upon it.

Analysts and investors can find all publicly available futures contracts using the Bloomberg Terminal, including data on various contract specifications, such as the quality and type of commodity, the dollar domination in which the contracts are traded, and historical price charts. The screen shot below details a futures contract recently made available for purchase. Users can locate it by entering KOA6 (code for Crude Palm Oil Active Contract ) in the command line and hitting the GO button. 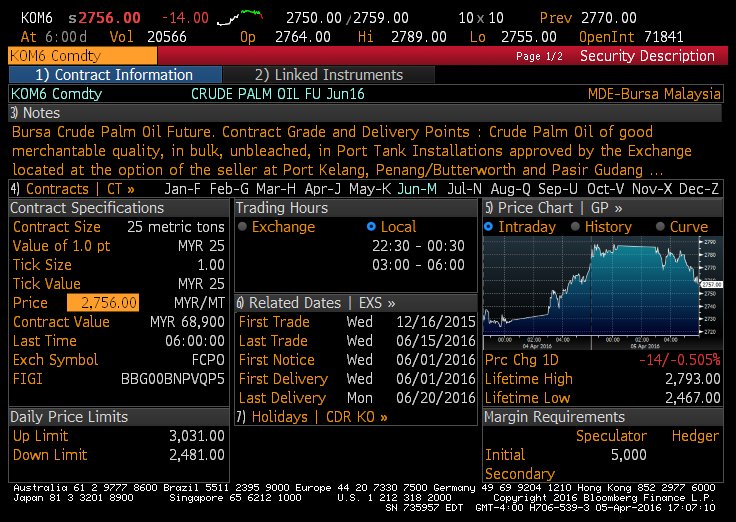 The Bloomberg Terminal also tracks data on biofuels. The screenshot below shows the price of futures contracts for various biofuel feed stocks, including crude palm oil, in Malaysian ringgit per metric ton (one ringgit equals $0.25). Futures contracts can be traded up to the date of the contract’s expiration, which results in the physical commodity being delivered to the contract holder. This information is relevant because the price of biofuel contracts could impact the supply and demand for consumable palm oil. High demand for palm oil as a biofuel would result in higher prices and more profit, and would make selling palm oil as a biofuel an attractive alternative to practicing sustainable palm oil production.

This screen can be found by typing BIOF (short for biofuels) in the command line and entering GO. A list of biofuels by type is available along the left hand side of the screen (not shown). The date field represents the last time the futures contract was traded. A 24-hour time format indicates that the contract was traded that day. A month/date format (not shown) indicates that the contract has not been traded since that date. 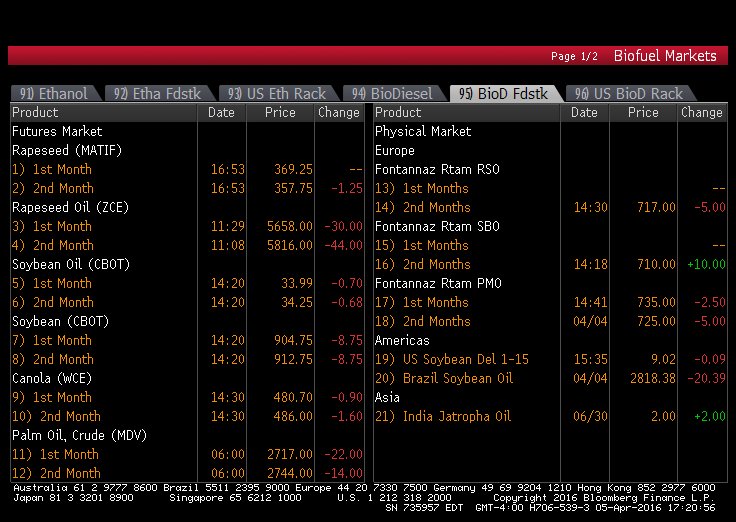 The Bloomberg Terminal also offers insight into the relationships between companies along the palm-oil supply chain. The image below shows the supply-chain screen for the Malaysia-based palm-oil company IOI Corporation. It shows the relationships between IOI Corporation’s suppliers, on the left, and its customers, on the right. The screen also shows comparable firms.

Users can navigate within the supply chain by clicking any of the companies. The screen will update with the new company at the center and its suppliers and producers on either side. Users can reach this screen by pressing the MENU key on the keyboard while on the main description screen for IOI Corporation. A list of categories will appear allowing the user to select the supply chain option. 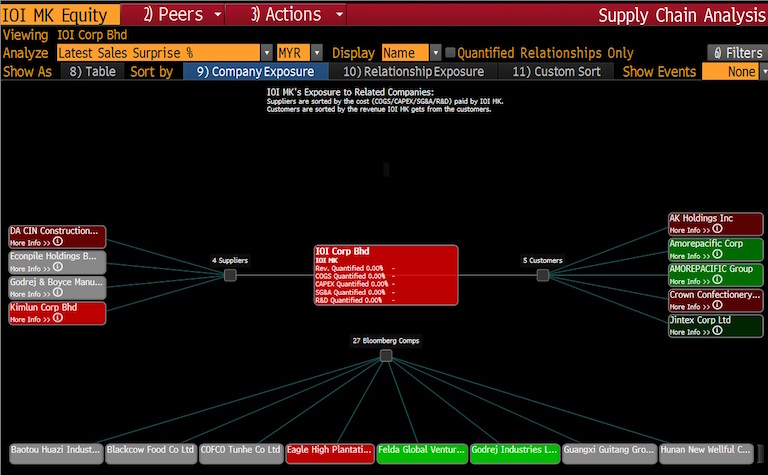 The Bloomberg Terminal also tracks other corporate assets that may be of interest to its users, such as power plant locations for companies that produce biofuels. The advocacy community may find this useful because power plants emit greenhouse gases and can pollute local water sources.

The screen shot below shows a map with the location of a power plant in Malaysia owned by IOI Corporation. The plant burns palm-oil biofuel to generate electricity to support the company’s production mills. Users can reach this screen by entering BMAP (short for Bloomberg maps) in the command line and hitting the GO key. The first filter sorts the data by region. Users can then choose from various other filters to determine the type of company they would like to see and the physical structures owned by the firm. 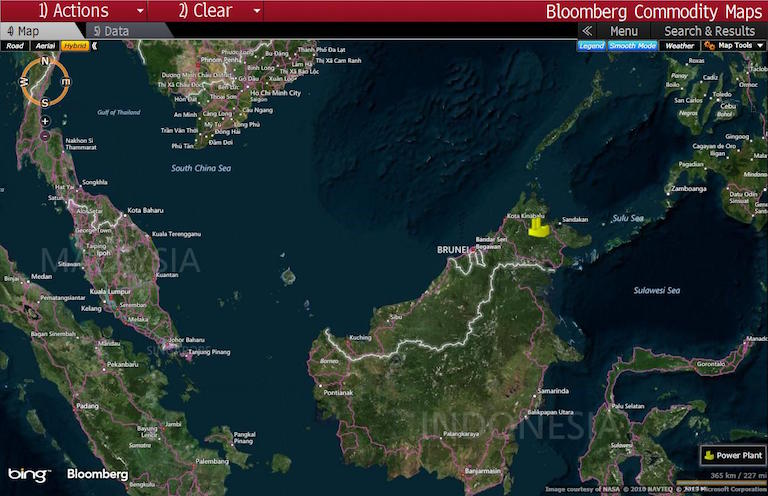 The following screen shot shows detailed information on regional ports on Peninsular Malaysia and the Indonesian island of Sumatra, with green icons representing ports. Information on ports is available via a filter on the BMAP screen. 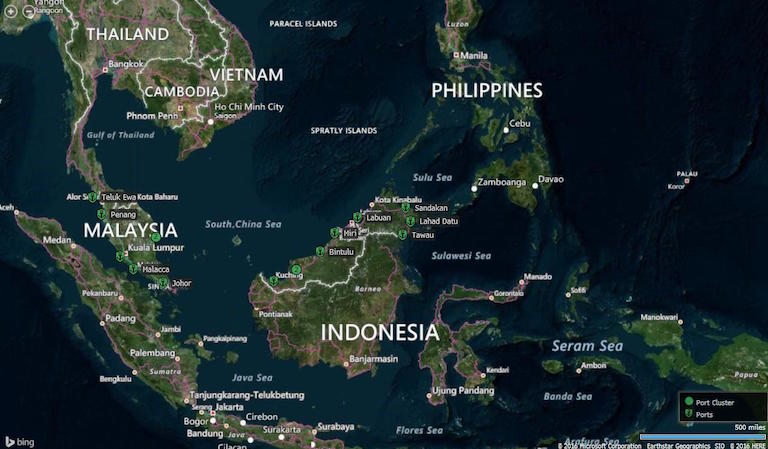 The Bloomberg Terminal can show even more detailed information for each port, such as its shipping lanes and nearby cargo vessels, including their identification numbers, as shown in the following screen shot. Blue triangles represent vessels, blue circles clusters of multiple vessels. The screen shot also shows the movement of two specific vessels: the blue line shows one vessel coming from the Andaman Sea stopping in Kuala Lumpur and then heading towards the Philippines and the green line shows a vessel coming from the East China Sea heading to Malaysia. Shipping lane and cargo vessel information are available via other filters on the BMAP screen, and are updated in real time.

This information is useful to the advocacy community because it helps reveal the entire production-to-consumption process. Knowing where goods are produced, who is transporting them, and where they are going can improve the quality of information used to decide whether to target a product or company with petitions, boycotts, or other campaigns. 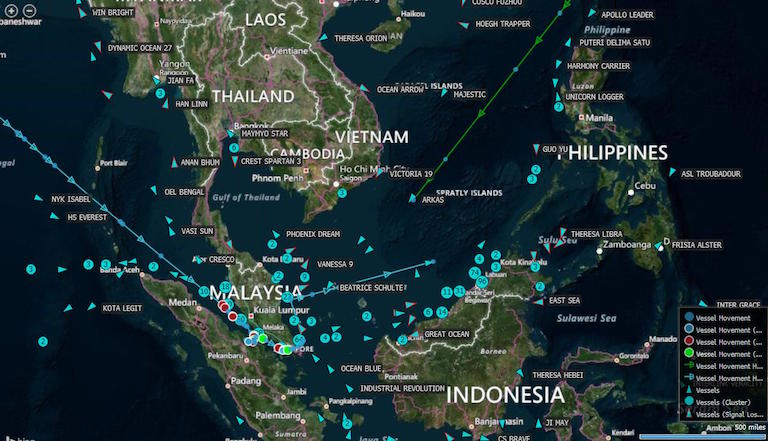 Collaboration between the advocacy and financial communities would only improve the quality and detail of the information available on the Bloomberg Teminal. More comprehensive asset tracking data — whether via Bloomberg or another system — would enable improvements across the palm-oil industry and others. Manufacturers that commit to only sourcing sustainable ingredients could confirm where the products were grown and refined. Producers are more likely to adhere to sustainability pledges when their buyers, NGOs, and other interested parties can scrutinize the tracking of their goods. And producers that sell CSPO could benefit from asset tracking to increase the price paid for guaranteed sustainable products, increasing their profits.

When this kind of self-regulation fails, advocacy groups can step in. Financial pressure is often the most effective way to force corporations to change their practices. For instance, exposing food manufacturers that violate their sustainability pledges could result in consumer boycotts or in trade partners terminating agreements. The damage to manufacturers’ brands and reputations can result in significant loss of revenue.

Combining the grassroots efforts of the advocacy community with financial industry tools like the Bloomberg Terminal could be the next step in limiting tropical deforestation.