How to use the Bloomberg Terminal for advocacy work: the basics

The Bloomberg Professional service is Windows-based proprietary software that offers users real-time access to global news sources, financial data, and analytics tools. It comes with a special keyboard and monitors, but is commonly referred to as the “Bloomberg Terminal” from the early 1980s versions that came as an actual computer terminal.

Historically, only for-profit financial organizations have used the Bloomberg Terminal. However, it has vast resources with useful data that the advocacy community could be leveraging to enact change. These include information about securities, Environmental, Social and Governance (ESG) information, global news feeds, shipping and port locations, and research reports from various institutions.

Bloomberg Finance L.P., the company that makes the terminal, has identified the non-profit sector as an underrepresented constituency in its user base. This lack of representation can be explained partly by the high expense of obtaining a terminal, which costs $24,000 a year, and partly by a lack of awareness in the advocacy community. Bloomberg Terminals may be available at larger non-profit firms or research institutions.

The initial Bloomberg welcome screen shown below has links to various tools like securities information, help functions, and links to customization menus. 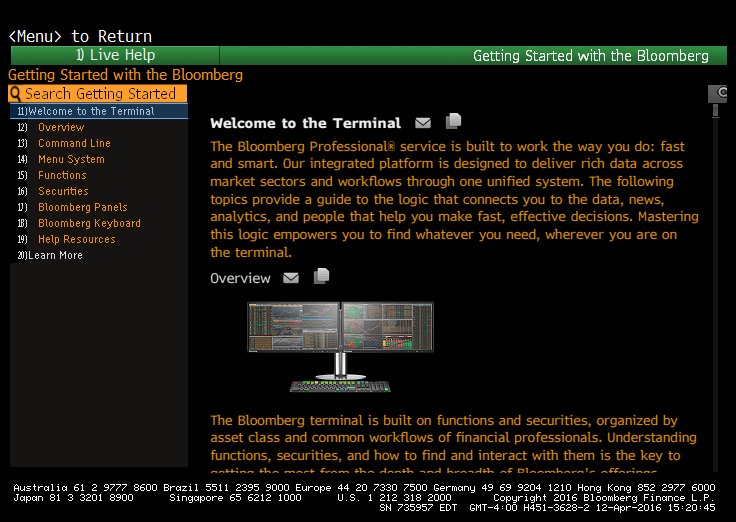 Users can completely customize the terminal based on their interests and intended use. They can set the home screen to display news feeds from sources around the globe on custom topics. The format below shows global news by headline, with a custom section on industry analysis. Users can find this news screen by typing TOP in the command line and then hitting the GO button. 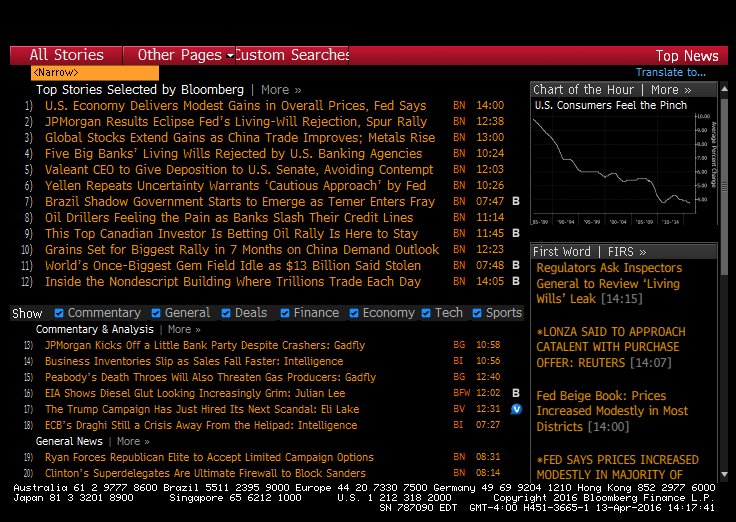 The screen shown below is another customizable format for viewing the news, which users can find by typing FIRS in the command line and then hitting GO. It shows the headline with a few bullet points for each article. 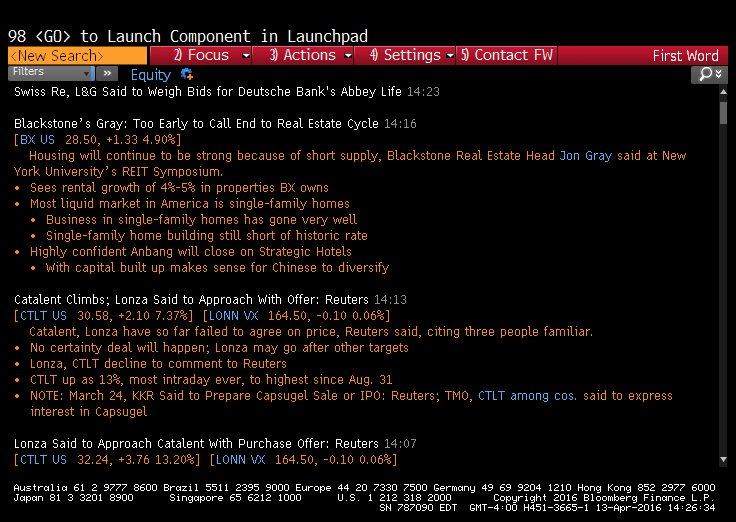 Users can also access company-specific information. There are multiple ways to search for a company on the terminal. You could type in the company’s exchange-listed ticker symbol and press one of the yellow category keys (EQUITY, FIXED, COMMODITY, etc) and then the GO button. Or you could type the first few letters in the company’s ticker symbol and the terminal will auto complete the popular corresponding companies. Alternatively, you could type the firm’s name in the command line, which also auto completes.

Financially material events can significantly impact a firm’s stock price. Using the Malaysia-based palm oil company IOI Corporation as an example, the following screens show how the Bloomberg Terminal tracks and conveys this information over time. As reported by Chain Reaction Research, IOI was subject to formal complaints with the Roundtable on Sustainable Palm Oil (RPSO) against its operations in Sarawak, Malaysia, and West Kalimantan, Indonesia. The report detailed the November 2010 and March 2015 complaints, filed by non-governmental organizations, which concerned illegal land grabbing, peatland clearing and drainage, clearing of so-called “high conservation value” forest, and planting inside a forest reserve. On March 25, RSPO suspended IOI’s membership as a result of the complaints.

The screen shot below shows the main landing page on the Bloomberg Terminal for IOI Corporation and basic financial data points. Users can access tabs with additional information by using the scroll wheel on the mouse. The top banner shows current stock prices, daily trade volume, and daily high and low prices. 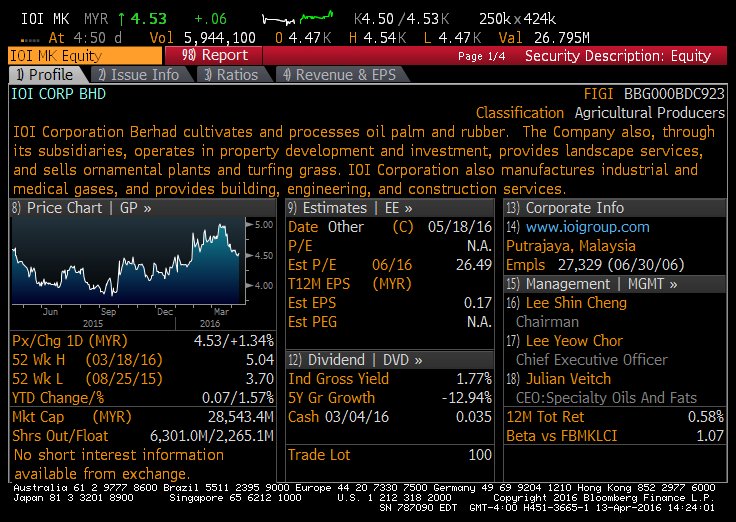 The price of IOI Corporation’s stock has been volatile since the initial complaint in 2010. The image below shows the company’s performance during the five years leading up to its suspension from the RSPO in March. IOI’s share price decreased by roughly 10 percent since the suspension was announced.

Users can look further into a company’s financial data for insight into its profitability and performance, as shown in the screen below. This screen can be found by pressing the MENU button located along the upper portion of the keyboard and then selecting FINANCIALS. There are multiple tabs on this screen with different financial information, but the most interesting to the advocacy community is the ESG tab. Bloomberg has begun capturing ESG information about companies based on publically available reports. This data appears primarily as a YES/NO response to relevant ESG questions. The financial industry has finally recognized the importance of this type of data, so Bloomberg will continue to expand its collection. 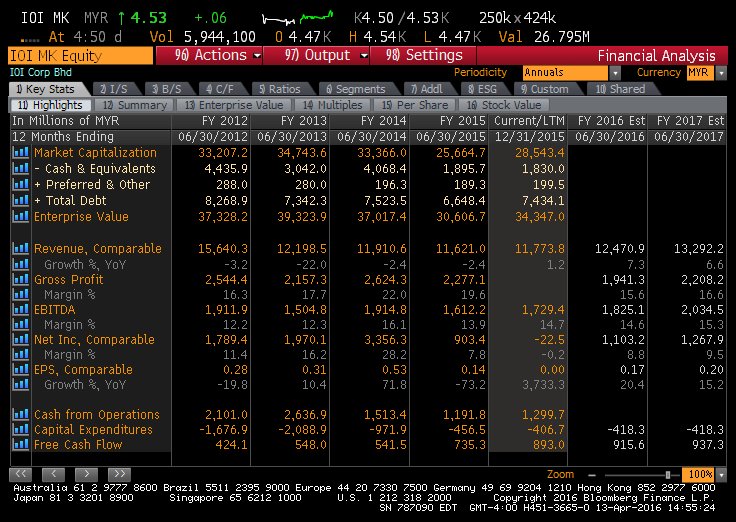 Financial investors rely on information to make decisions, which is why Bloomberg collects and updates data in real time. Publically available company-generated documents, such as annual reports, can be found using the MENU key on the keyboard and then selecting REPORTS. The screenshot below shows a typical listing of available reports for a specific company — IOI in this case. 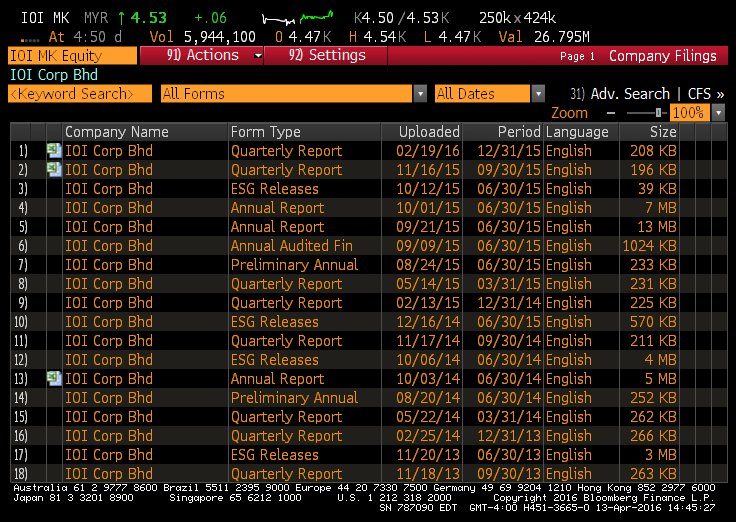 The terminal also provides analyst reports from reputable investment firms on major company and industry events, as shown in the screenshot below. Bloomberg also assigns its own analysts to cover various global sectors and industries. The analysts’ contact information is available, so users can get answers directly from the source. Communicating with analysts domiciled in regions of interest could help members of the advocacy community expedite their research process and ultimately help generate reports with more robust information in less time.

The screenshot below lists analyst reports with a summary headline, the source of the report, and investment recommendations. This example shows various analysts’ investment recommendations for IOI Corporation after its suspension from the RSPO. In March, Malaysian investment banks received the Chain Reaction Research report and began conducting their own analyses, which resulted in suggested credit downgrades and cash-flow warnings. Some analysts believed the impact on IOI Corporation’s stock price had already been factored in, which supports their “buy” recommendation, while others recommended holding the stock if the investor already owned it. 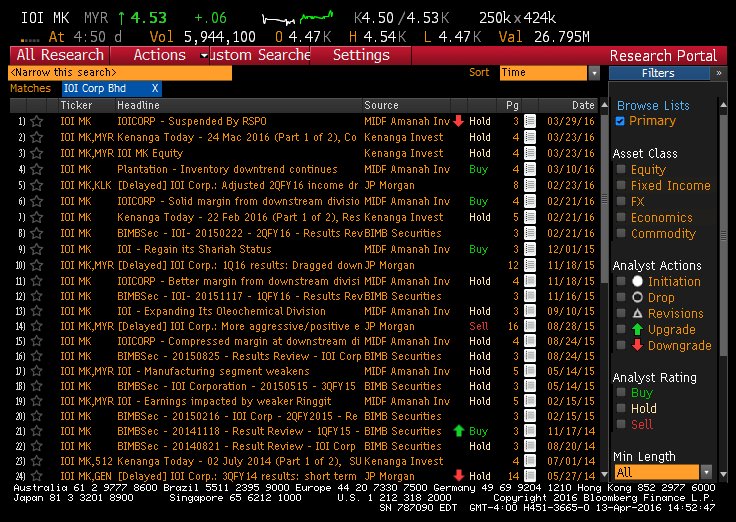 The research report shown below was generated on March 30, three business days after the announcement of IOI’s suspension from the RSPO. Users can access the full report, which details the financial impact and recommendations for investors. The report was created by the research department of Malaysia-based MIDF Amanah Investment Bank Berhad. This is a good example of the kind of resources Bloomberg can leverage to make research easier for the advocacy community. 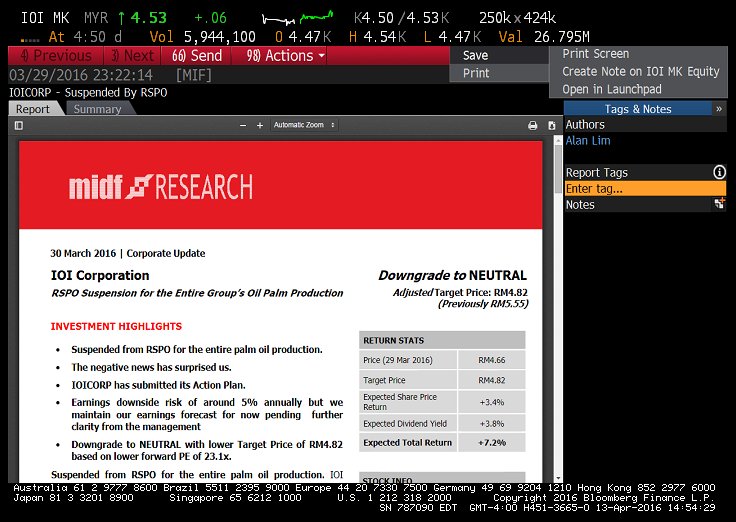 Advocacy analysts may be interested in knowing the identity of a firm’s owners and investors to determine whom to petition. The Bloomberg Terminal offers users a detailed breakdown of both. The screenshot below shows the investors in IOI Corporation and their aggregate positions in the company. Users can click on the names to find more detailed information. 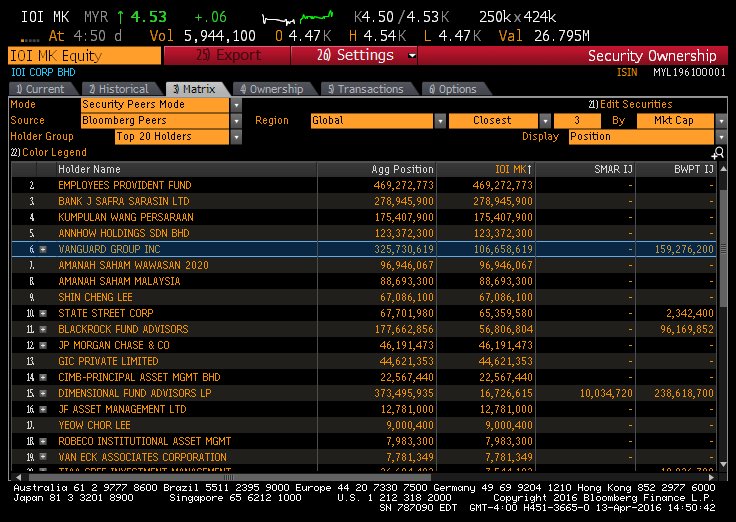 The next screenshot offers insight into the investors’ specific investments and positions. Vanguard, as highlighted, is one of the largest asset-management firms in the world and is frequently included in the investment options for retirement plans. Most individual investors do not know all of the holdings in their mutual funds, which can be discomforting to people who care about social or environmental causes. Adding one of the many Vanguard funds shown below could expose investors to IOI Corporation, a company that may or may not align with their values. 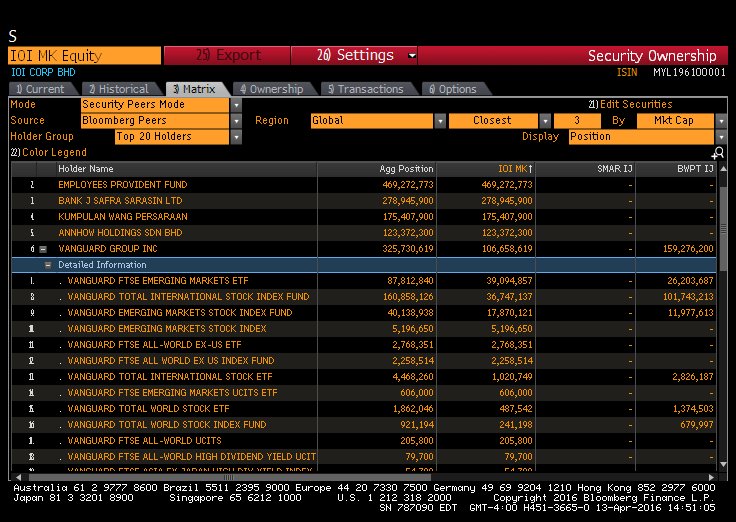 These are just a few of the many resources available on the Bloomberg Terminal that may interest the advocacy community, a demographic that could benefit from making greater use of this tool.