Drone Herders: Tanzanian rangers and researchers use UAVs to protect elephants and crops 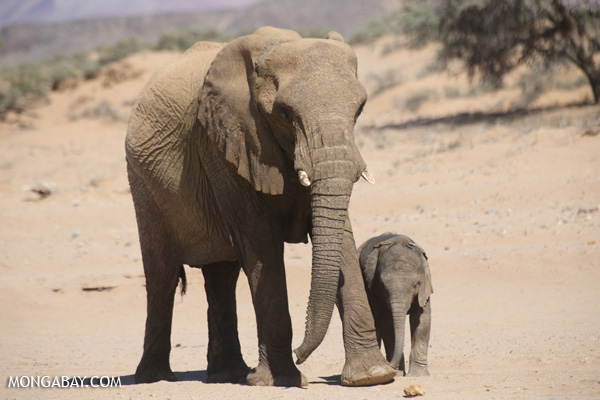 HEC, otherwise known as “human elephant conflict,” is a centuries-old problem responsible for the deaths of untold numbers of elephants. This ongoing battle between African farmers trying to grow crops and hungry elephants foraging for a meal, has motivated conservationists to find solutions for protecting the largest and one of the most intelligent land animals on the planet. Scientists’ most recent effort — Unmanned Aerial Vehicles (UAVs), frisbee-sized remote controlled quad-helicopters — may provide the answer that researchers have been looking for.

At a time when elephant deaths have hit record numbers, that solution is more than welcome. A recent spike in HEC and poaching are responsible for more than 100,000 elephant deaths in the three-year span between 2010 and 2012, according to a recent analysis published in National Geographic Magazine. This leaves the current elephant population estimate for the African continent at somewhere between 470,000 and 690,000 animals. The Tanzanian government reports that at least 30 elephants are shot and killed each day in their nation.

Tanzania’s Tarangire National Park is the “drone herding” test site for this new approach to HEC resolution. The Mara Elephant Project and RESOLVE, an environmental conflict resolution organization, are the brains and brawn behind the project. Should long-term testing yield consistent positive results, simple, low-cost drone technology could very well save many thousands of elephants’ lives, something that traditional methods of deflecting elephants from human communities have not succeeded in doing. 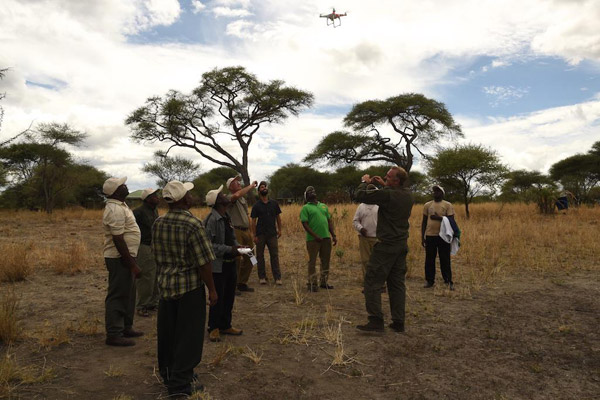 Habitat loss forces elephants into areas where they normally wouldn’t wander, and into farmland where they feed on and ruin crops. Farmers often try to deal with foraging elephants on their own, using scare tactics, but the animals quickly get used to these methods. Nathan Hahn, a research fellow with RESOLVE’s Biodversity and Wildlife Solutions Program (BWS), describes what happens: “When elephants habituate to traditional methods of throwing stones, making noise, or flashing lights, local communities frequently resort to more extreme measures, such as poisoning, trapping and shooting with bows and arrows, which can result in fatal injuries to both elephants and people. HEC pits people against animals and contributes to communities either passively or actively participating in the extermination of elephants.” In some cases, local people react by allowing poaching, or even by supporting it, in order to eliminate elephants seen as economic pests.

Back in 2011, Marc Goss, a researcher with the Mara Elephant Project, was actively researching non-violent ways to keep elephants out of crop fields when he stumbled on a possible answer. Experimenting with UAVs, he discovered that the buzzing sound of an AR Parrot drone alarmed elephants, causing them to flee. “We realized very quickly that the elephants hated the sound of drones. I’m assuming that they think it’s a swarm of bees,” Goss said. Mara saw the potential of UAVs in battling the HEC problem, and of using them to herd elephants away from crops and danger. 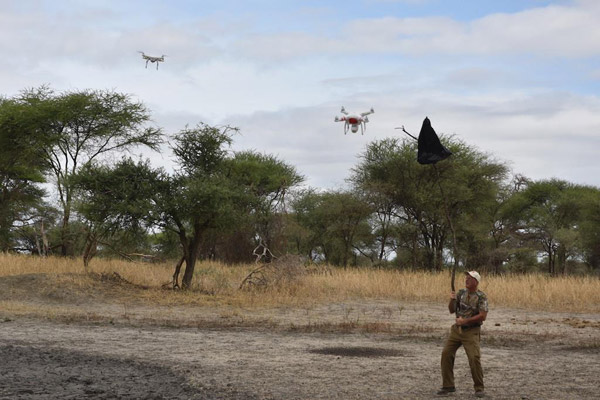 David Olson from RESOLVE pretends to be an elephant to help the rangers practice herding techniques. The branch was used to simulate an elephant’s height. The rangers must avoid flying the drone too low and hurting an animal. While this whole process is new, they have found that sweeping back and forth behind them in a herding fashion is the safest way to keep the elephants moving and from turning back towards people. Photo Credit: Jonathan Konuche

In August 2014, Goss teamed with RESOLVE to develop the method further. They upgraded their choice of drone to the DJI Phantom. During trials they found that, surprisingly, most elephants approached by the drone responded by moving away in a group within fifty seconds. A relatively quick response time. “When you look at the aerial footage and see it in person, it really does look like a flock being herded,” said Goss. The researchers discovered that a drone could keep an elephant moving away for up to twenty minutes.

Positive test results such as these helped to attract the aid of Tanzanian wildlife authorities. Goss and his team took the opportunity to put the technology to use with seasoned national park rangers who have a unique understanding of elephants and their behavior. In November 2014, Mara and RESOLVE joined with the Tanzanian Wildlife Research Association (TAWIRI), the Tanzanian National Parks Association (TANAPA) and the Tanzanian Wildlife Division (WD) to begin training rangers to use the UAVs. This partnership provided the drone-herding project with a stronger base for real-world application, and a way to test the effects of drones on a larger scale. 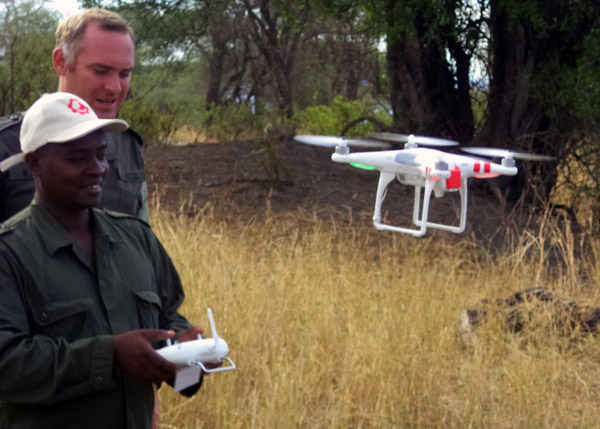 “It’s really important to us that the rangers and game wardens be the ones flying the drones with the elephants,” said Lucas Malugu of TAWIRI. “They know elephants well, and they’re the ones who are stationed here, and it’s important that they can respond and deploy quickly before too much [crop] damage is done.”

Goss provided the initial training, familiarizing the rangers with drone operation in the field, something they took to rapidly. Hands-on instruction from Mara allowed the rangers to develop a solid understanding of how UAVs work — enough that they could then teach other rangers and individuals how to use the drones.

In February 2015, Goss’s drone graduates trained a new group of rangers, focusing on the same effective herding maneuvers. Since conditions in the field are not always the same, the team covered new skills as well, such as flying at night, maintenance, and deploying the drones from moving vehicles — especially important due to the impracticality and risk of getting close to elephants on foot.

A major concern of the researchers was that the animals would become acclimated to the drones, as they have with other aversion tactics, which is where the chili powder comes into the picture. The DJI Phantom UAV is not only more intuitive to fly than the previously used AR Parrot, but is capable of carrying small payloads. Aerial spraying of chili powder offers “an alternative, humane, rational and sustainable way to deter elephants when they have become used to conventional methods,” said Julius Keyyu of TAWIRI. “It is good to see that elephants run away immediately on arrival of the drone!” 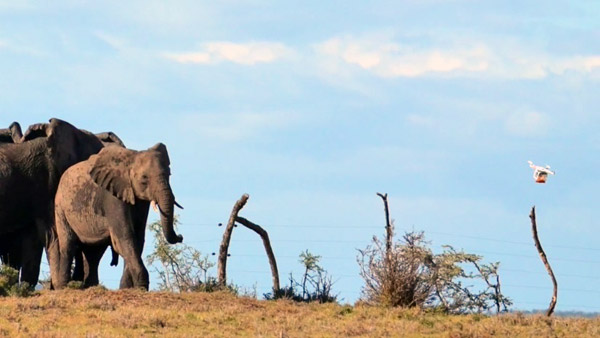 It seems that elephants have a greater aversion to chili powder than they legendarily do to mice. RESOLVE has now launched a fundraising campaign on IndieGoGo to help develop chili powder fences to use along with the drones.

The researchers and rangers make sure the chili powder is used humanely, that it isn’t deployed directly on the animals, or used when there are calves present, and that the animals aren’t irritated by it to the point of being harmed. “The hope is that we will only have to use the chili several times, and this will teach the elephants to associate the noise of the drone with chili, and it won’t have to be used every time,” said Hahn. “We’ll know with time how this can actually work.”

RESOLVE continues training rangers to teach other rangers how to fly the UAVs, thereby putting the technology in as many qualified hands as possible, which may eventually lead to the creation of HEC response teams. Of course, making that plan a reality will require months of testing and fine-tuning, and solid data to support the effectiveness of the technique. 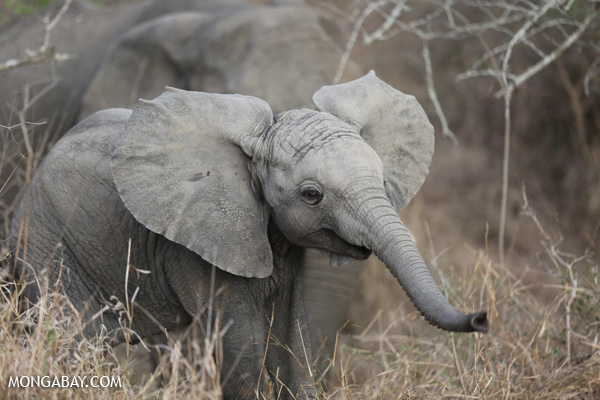 “Because this is a new mitigation strategy, we are hesitant to implement it on a larger scale before we have proof that it can work,” said Hahn. “Up to this point, all signs point to this being a very successful strategy, and we have enough rangers trained to see how this works during the peak crop raiding season this summer. In future seasons, these rangers will be able to train other teams of rangers, which to me is one of the most exciting aspects of this project.”

While the drone-herding project is currently still in the process of testing the long-term reliability of UAVs, the individuals behind its creation remain optimistic to the promise it has shown in improving elephant-farmer relations, and preventing elephant deaths.

Aerial footage of a herd of elephants being moved with a UAV.

A video of two rangers working with a drone.