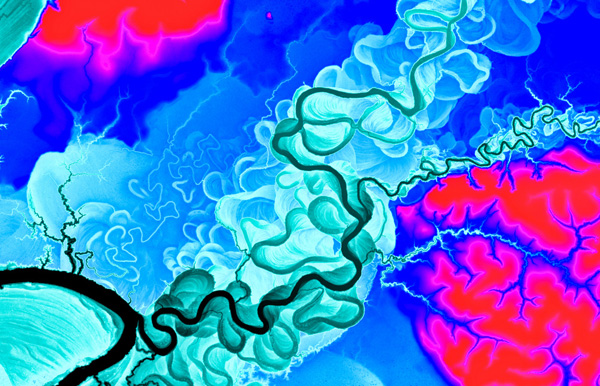 CAO lasers easily penetrate forest canopies to reveal minute variations in ground elevation associated with soils. This images shows a ground elevation map in dense tropical forest of western Amazon. The map uncovers a history of geologically old meanders in the Tambopata River in Peru. Today, only the main stem of the river persists, and all of the prehistoric meanders are now covered by forest. Local high points in elevation (red) are the well-known terra firme or terraces found throughout the Amazon basin. Caption and image courtesy of CAO.

Conservation efforts in Borneo’s embattled rainforest may get a boost with the launch of the newest version of an advanced airplane-based monitoring and assessment system.

On Friday, the Carnegie Institution officially unveiled the latest upgrade of the Carnegie Airborne Observatory, an airplane equipped with technologies that enable scientists to conduct extremely high resolution scans of forest structure, biomass, and biological diversity. The platform has generated a wealth of information in places where it has been flown before, including surveying tree diversity across the Amazon, measuring forest carbon stocks in Panama and Madagascar, identifying critical wildlife habitats in Colombia, revealing massive tree die-offs in remote areas in Peru, mapping invasive plant species in Hawaii, and documenting previously unknown lion behavior in South Africa.

But the new plane is even better, according to Greg Asner, who conceived of and led development of the plane’s systems. The overhaul has doubled the plane’s sensing range and greatly expanded its capacity to collect and analyze data.

“The system produces maps that tell us more about an ecosystem in a single airborne overpass than what might be achieved in a lifetime of work on the ground. Our improved onboard computing, software integration, data capture, navigation, and ergonomics would make any Silicon Valley tech nerd drool,” wrote Asner in a blog post announcing the new plane. “Flight operations are streamlined and can be rapidly mobilized from California to anywhere on Earth.” 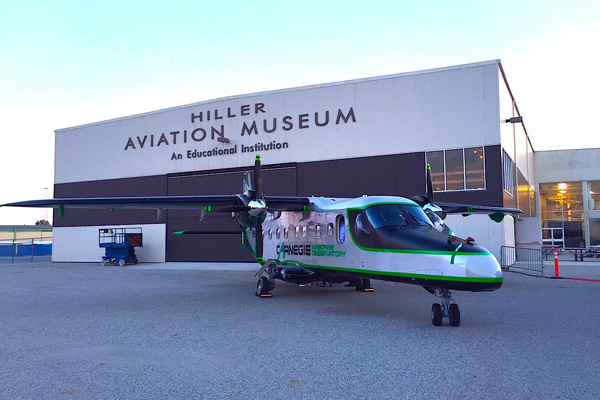 Importantly, the new plane is owned by Carnegie. Previous planes were leased, reducing the flexibility of missions. The purchase, made possible by William R. Hearst III, allowed the Carnegie team to fully “trick out” a Dornier 228, optimizing it for performance and data collection.

The earlier incarnation of the system, built in 2011, featured path-breaking technologies that allowed Asner and his team to capture detailed images of individual trees at a rate of 500,000 or more per minute. At the same time, plane’s spectrometer used chemical and optical signatures to differentiate between different types of trees, enabling the CAO to create intensely detailed biodiversity maps of forests where in some places, humans have probably never set foot. The plane’s powerful dual-ranging LiDAR system allowed the researchers to map the forest floor, revealing under-canopy damage from gold mining and selective logging as well as its geologic history, including the path of ancient rivers, soils, and past inundation. 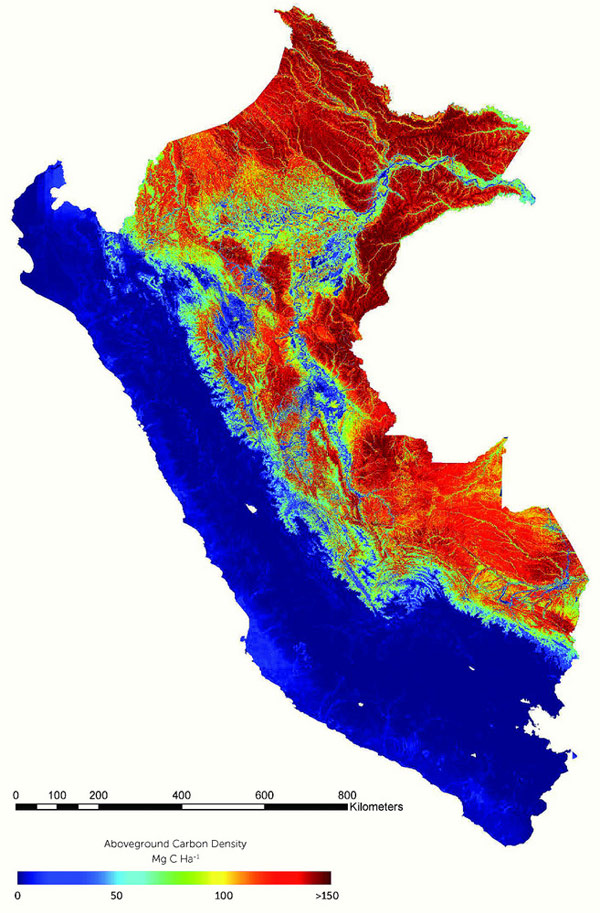 The CAO and the Peruvian Ministry of Environment mapped Peru in 2011-2013. Costing less than one U.S. cent ($0.01) per hectare, the CAO team achieved mapping accuracies that far exceed anything that can be achieved using field plots or satellites alone. The CAO found enormous variation in carbon stocks, and mapped the enormous impacts of humans on forest carbon dioxide emissions. Image and caption courtesy of CAO.

Most of Asner’s work has taken place in Latin America — where he created wall-to-wall carbon maps of Panama, Peru, and the Colombian Amazon — and Southern Africa. While he’s planning to first take the new version of the plane to Ecuador, he’s now also eyeing new frontiers, including drought-stricken California and Malaysian Borneo, which could serve as a gateway to the world’s most endangered rainforests.

“Despite the wealth of knowledge here in Silicon Valley, we still know very little about the State’s forests,” he said. “These forests afford critical ecosystem services, including helping maintain the flow of water to cities and agricultural areas. We need to better understand the role forests play in sustaining the systems that underpin the state’s economy, but also how they are being impacted by the ongoing drought. CAO3 can help us do that”

“Sabah offers an incredible chance to study Borneo’s fast-disappearing rainforests, identifying places where conservation efforts can have the biggest impacts as well as opportunities to improve land use practices to boost production on existing agricultural lands,” he continued. “Mapping Sabah could help support the state’s emerging push to transition toward a more sustainable economy.” 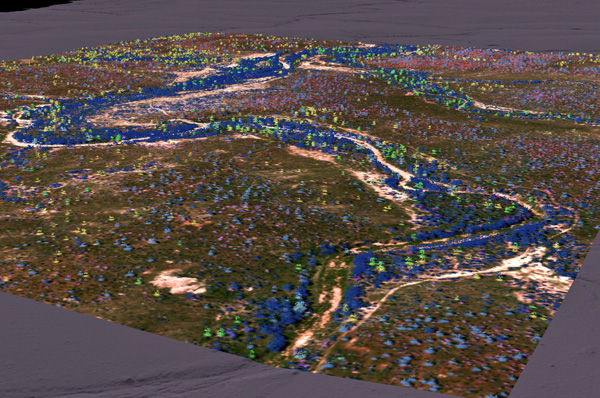 CAO scientists mapped species in an African savanna — each color is a different species. The maps were tested in the field with enormous success. Today species mapping by CAO is becoming routine. Image and caption courtesy of CAO.

Asner highlighted several ways CAO could help Sabah’s forests, including building a biodiversity map across the entire state, identifying key corridors and habitat for endangered elephants and orangutans, establishing a baseline for measuring forest recovery, pinpointing optimal places for community-based microhydro projects, and linking water provided by forested watersheds to specific plantations and urban areas. He also noted that the data could help reduce the environmental impacts of Sabah’s palm oil industry by getting a better handle on where damage is still being done, finding optimal non-forest places for expansion, and supporting efforts to increase smallholder yields.

Cynthia Ong, founder of LEAP, a Malaysian NGO working to “green” Sabah’s economy, agreed that the potential is vast.

Asner hopes to raise funding to map Borneo in 2016. He says about two-thirds of the funds needed have been pledged.

Once CAO is in Asia, it opens up the possibility of mapping additional threatened forests, including other parts of Borneo as well as the Mekong region, where forest loss is fast accelerating, according to data recently released by Global Forest Watch, a portal run by World Resources Institute that relies heavily on satellite imagery for assessing forest cover. Asner’s work could potentially complement that initiative by establishing high resolution baselines that distinguish different forest types as well as plantations.

“Recently, CAO forest mapping played a pivotal role in debunking a company’s claims that it hadn’t cleared species-rich rainforest in the Peruvian Amazon,” said Blume, who’s also a Mongabay board member. “CAO could soon bring the same level of transparency to other parts of the world, while supporting on-the-ground research and conservation programs.” 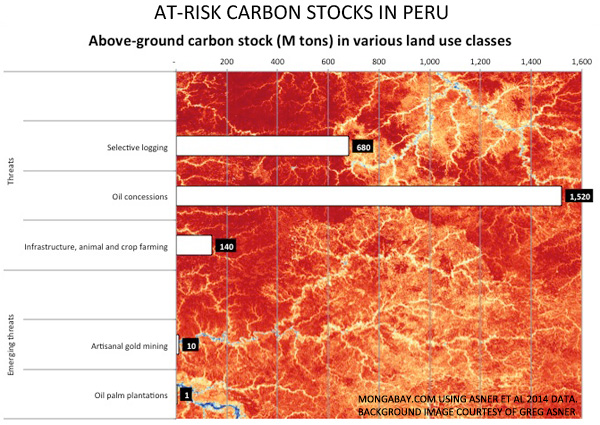 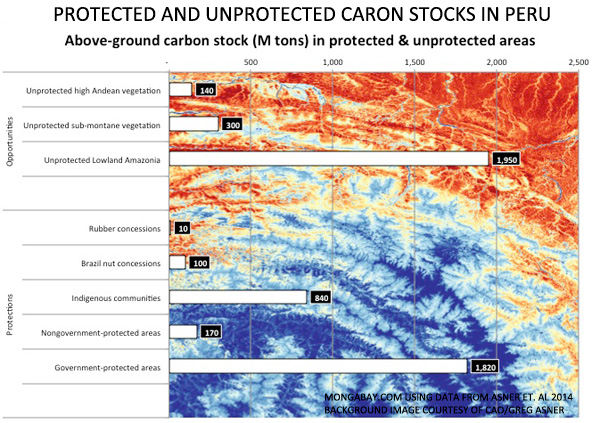