“Across Africa, illegal killing and trade in wildlife, especially of iconic species such as elephants and rhinos, has now reached crisis proportions. Illicit wildlife trafficking now comprises the fourth largest illegal trade internationally after arms and drugs trafficking, and trafficking in human beings. In recent years, tens of thousands of elephants have been killed every year for their tusks. Faced with this unprecedented level of poaching and organized wildlife crime, many conservationists now fear that species such as elephants and rhinos may disappear in the wild within our lifetime.” (D’udine, Henson, Malpas, 2006, p. ix) 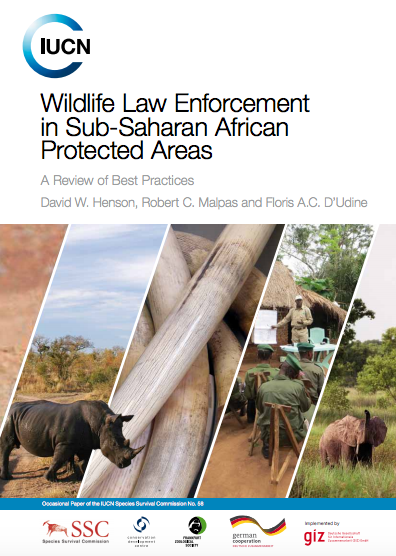 While the report acknowledges the importance of governmental action to combat poaching and illegal trade, the focus remains on examining successful site-level practices.

The report describes mostly well-known methods that have proven to be effective in other sectors. While many can be implemented with limited financial resources, they require greater knowledge of management methods than is common among wildlife law enforcement leaders and managers. The authors hope presenting tested methods will help guide wildlife managers who lack the time and resources to test new management methods themselves.

The report explores technologies (unmanned aerial vehicles, acoustic traps and camera traps) and methodologies enhancing wildlife law enforcement efforts, yet practitioners across Sub-Saharan Africa emphasized that there is no substitute for a well-equipped, well-trained, and highly motivated ranger. The report is meant to serve as a manual providing insight into practices that are currently working or could be adapted to different circumstances.

Highlighting three sections, 1) Law enforcement patrols, 2) Law enforcement management and 3) Intelligence and investigations, this report emphasizes that there is no universal solution to combatting wildlife poaching and trafficking. Geographies, species, resources and laws all influence and dictate how conservationists and wildlife law enforcers can operate in a given area.

While this report is not exhaustive, it should serve as a useful tool for those working to end wildlife poaching and trafficking and those interested in gaining a deeper understanding of the issues facing wildlife enforcement efforts on the ground in Sub-Saharan Africa.

You can download a copy of the report here.